You've probably had your mouth watering and started to imagine salads, meats, pastas, risottos, tapas and even pizzas and hamburgers with the tasty gourmet touch that truffles bring to every dish.

If so, we invite you to learn a little more about this olive oil with black truffle that debuts in ben-BO Essència Mediterrània and to which we wish a major success in the world of cuisine (and yours, of course).

What's so special about the black truffle in our olive oil?

Let's face it, all the black truffles are sensational, but it's true that some of them stand out from the crowd. And this is, without a doubt, the truffle we have recruited for our oil. The truth is that Lérida concentrates around 70% of Spanish truffle production.

Perhaps you already know that the black truffle (Tuber melanosporum) is a delicious subterranean fungus whose growth is possible only with roots of certain trees or shrubs such as, for example, oak, kermes oak, hazelnut or holm oak. So it's possible that when you run into an oak grove, if you're a black truffle enthusiast, it will give you the chance to imagine all the succulent wonders it hides in its bowels.

It is true that its price is not exactly economic, but you must bear in mind that only a few tiny quantities (in thin slices or grated) are necessary for it to begin to work its magic. In fact, it is capable of enhancing the flavour of any dish that is put in front of it. That's why the most renowned chefs love truffles and reserve a role for them, however small, in many of their dishes. Martín Berasategui, one of the great swords of Spanish cuisine, has been paying homage to the black truffle in his restaurant for 20 years.

And if we take a look at their virtues, you will see that the passion felt by the food connoisseurs for the black truffle is more than well founded as it provides us with selenium, potassium, iron, sodium, vitamins of the B group, vitamin C, and a great supply of water. To such an extent that the Spanish Nutrition Foundation (FEN) recommends its consumption. There, on the FEN website, we are defined as a mushroom full of "mineral fragrances, moss and moist wood, with a divine smell and intoxicating. These are some of the nice words that this organism dedicates to the black truffle and no, we haven't added another adjective.

But why is the black truffle so expensive?

You probably don't know why this mushroom is priced so high with infulas. You will understand it immediately. Its high price is explained by the growing conditions and its scarcity. From the time it is cultivated until it is harvested, nine to eleven months are spent underground, in addition to the particularities of its harvest, which requires trained dogs. Before, they used pigs that looked for them by pure instinct, but the smell of the dogs did not take long to reveal itself as an infallible radar.

If you add to this delicacy the goodness of extra virgin olive oil of exceptional quality, the delicatessen rises to the cube. For this reason, in ben BO Essència Mediterrànea we have devised this innovative product of virgin olive oil with black truffle for you to enjoy and palate it in your dishes. You will definitely become the Martín Berasategui of your home... 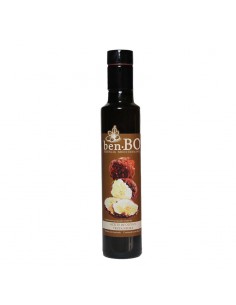 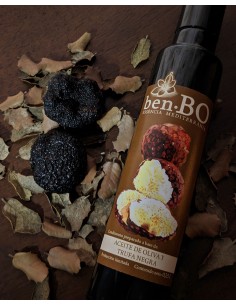 Seleción Gourmet
A118
€6.60
The black truffle benBO salt scale is elaborated in an artisan way with Mediterranean salt coming from the coast of Alicante and natural truffle from the north of Spain. It is a salt of great quality, a gourmet product essential in the kitchen of lovers of gastronomy.
Glass jar Mini glass jar 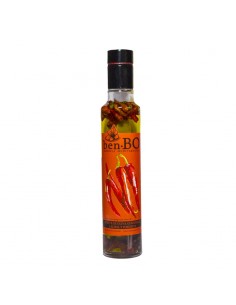 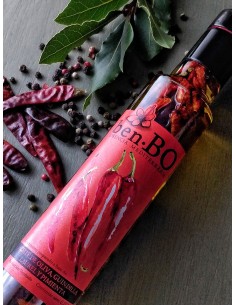